Not a problem child, just a child with a problem

In what is a very exciting week with the release of his eagerly anticipated book ‘Check Mates’, Stewart Foster took time to answer a few questions with myself, David Keyte. A book with a subject very close to my heart and a character called ‘Mr Keytes’, this is one that will sit on my shelf for many years to come. 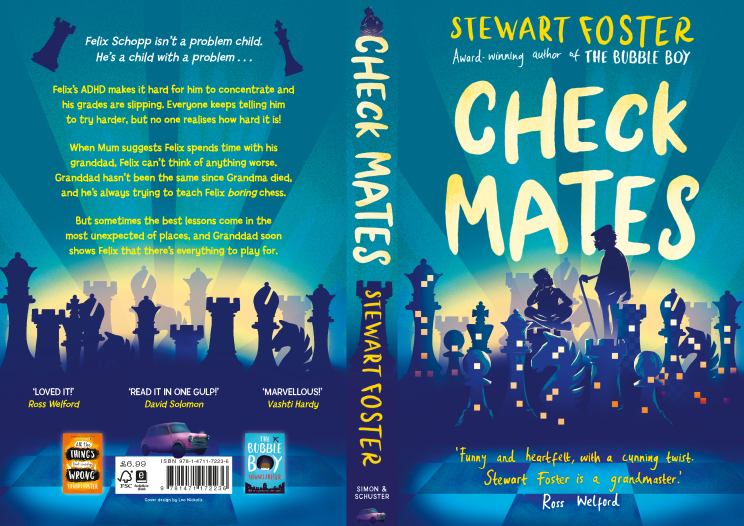 So what is ‘Check Mates’ all about then Stewart and how did you find the writing process?

Check Mates is a story about, Felix, a boy struggling with ADHD and his Granddad, who is struggling for a very different reason. For perhaps the first month, the story was flying along with me having as much fun as the two characters as they got to know each other and I got to know them. It was a blast, as Granddad’s crafty tactics led from chores to chess while Felix daydreamed of fighting a war from his treehouse with his friend, Jake. However, as I continued, I found I was having the same problem to sit still, as Felix. I could barely write two hundred words without getting up for bourbons! This was tragic for my daily word count, and my waistline!

I’d love to hear a little more, how did you choose to address ADHD and its role within the book?

I was however, still loving the fun I was having with Felix and Granddad, especially as the threat of an OAP going Suba Diving loomed. Eventually, like Granddad, I decided not to treat ADHD as a problem and, in the same way Granddad used methods to focus Felix’s mind, I did the same by rewarding myself with long cycle rides, but only after I’d written two thousand words. Eventually Felix’s and his granddad’s relationship began to blossom, as Granddad coaxes his grandson to concentrate, and Felix begins to realise that it’s him that’s the winner, not his ADHD. Like many kids these days, he’s had years of being misdiagnosed and misunderstood by doctors and teachers, but now hopes that his days in the isolation room are over. He now has an identity. Felix’s name is Felix Schopp, not, Felix ADHD.

Felix is a tremendously complex but likeable character, tell us a little more about him?

So, all the way through Check Mates, I strove desperately not to let ADHD define Felix. Felix is funny because he IS funny. Felix has a great imagination, because he HAS a great imagination. Yes, he has a ‘Problem’ but I wanted the reader to see that ADHD can be turned on its head and that we should encourage the creativity that can come from it. Felix’s Granddad teaches him chess, to help him concentrate at school, but at no point does he tell him to stop imagining he’s playing war games in his tree. I guess that’s one of the big things I’d like people to take from the book; to encourage imagination and creativity, and in doing so, feel like they can be good at something, whatever it may be.

A huge thank you to Stewart for taking the time to answer my questions, now stop reading this and order yourself a copy!